What Is Squeeze In Poker?

Squeeze is generally considered a preflop bluff. It occurs when a player reraises after there has been a raise and one or more callers.
Basically you are taking advantage of the loose image of the first raise, and the later callers are also showing weakness. The first raise is often difficult to call because they often raise with weak cards. The later callers will also be difficult to call with weak cards. 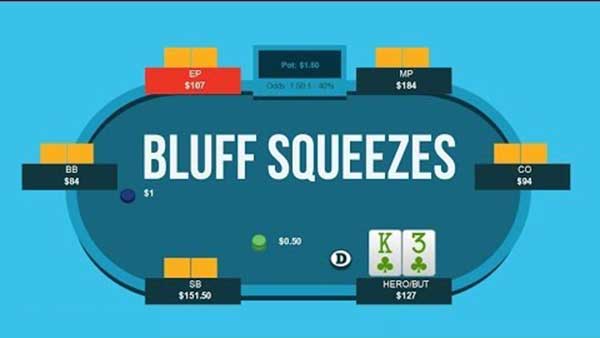 What Is the ‘Rake’ In Gambling?

Do you see why this skill is effective? We will talk in detail in the following sections.
See More :
http://news-sportsingapore.blogspot.com/2019/11/horse-racing-in-past-short-history.html
How To Get A Squeeze?

The squeeze is determined by the situation, not the card.
You have to determine the situation before using this game, otherwise it will be very expensive. So you should understand the use from the beginning rather than try and develop gradually.

A typical situation of squeeze is when a loose-aggressive player opens the pre-flop, another player calls and in your turn immediately launches a re-raise or all-in, doing for both to fold and you get the pot. The basic structure is as follows:
- Player A: Raise
- Player B: Call
- Player C: Re-raise All in ( C is Squeeze)
- Player A+B: Fold
- Player C: Win (C also can re-raise without all in that is still called Squeeze. It is quite same with 3bet)

Using Squeeze on cash games and when deep stack in tournament.

Using squeeze skill in cash games or the early stages of a tournament when you are deep stack, there is no need to all in. However, it can be used successfully when shortstack by all in if they are confident about the situation and know their opponent.
Raise 4 times as much as the first raise is the raise level that you need to remember when you squeeze. Make sure that you squeeze with a potential card like the suited connector or similar in case your squeeze is called.
If you have not played a good post-flop yet, we recommend that you do not squeeze when playing cash games or when you are in the deep stack at the tournament.

Why is the squeeze skill effective?

The effect of squeeze is from the loose image of player A.
Player B knows that A raises at the pre-flop round too much, so there is a good chance that there are no bad cards. That's why B decided to call raise with a different kind of average because he thought that his hand was stronger than A.

The second player calls the first raise because they think that the loose open player does not necessarily have a strong hand.

Now when player C’s turn, he learns that both are very difficult to have strong hands, so he all-in to the other two opponents discard his average cards. Player A folds his hand because the card is not strong enough. Player B folds because at first he just wanted to see the flop and fight A.

Player A folds because he raises with a weak hand, player B drops because he calls player A with an average hand and thinks that he is stronger than A.
As you can see, though player C holds what card, it does not affect the outcome of this move. This attack succeeds simply because C person reads the situation correctly.

This skill looking easily will help you have the best moving in Poker. If you are a beginner or a pro player, this article is still useful for all of you.  Using this knowledge to get the big tricks to win the pot.

Hello,Your all post are nice .Here We talk about online casino games which has been provided by the sgace1288.com at singapore .you can play online games at anywhere at ant any time hurry up you get a jackpots and discounts on our premium games our online games services are Online Gambling Singapore, Online Casino Singapore , Online Slot Games Singapore , Online Betting Singapore .
Visit : https://sg.ace1288.com/en/home

ZhenHUb said…
Very informative blog is helpful for people to have eyes on top online casinos in canada.Very interesting to read. I really love to read such a nice article. Thanks!
July 3, 2020 at 10:01 AM

Popular posts from this blog

Playing online gambling in Bet88 Singapore a trusted online casino in Singapore and Malaysia You will get many interesting experiences at Be88 Singapore.